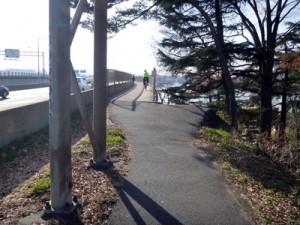 The narrow path approaching the 14th Street Bridge from the Jefferson Memorial is constrained by a I-395 sign support, which creates a hazard pinch point.

Over 1,800 bicyclists crossed the 14th Street bridge on Sept.13th, 2011. That number has no doubt increased by now. Most cyclists riding on the bridge during the morning rush are coming from Virginia to major employment hubs: Federal Triangle, downtown D.C., and Capitol Hill. Those “in the know” riders are conditioned to the fractured connection between the 14th Street bridge and the 15th Street cycletrack. That’s not typically the case with new riders and visitors to the city who don’t know about, or can’t find, this important connection. The connection between the bridge and the 15th Street cycletrack simply does not accommodate the amount of traffic that crosses it. Improving the connection would also allow cyclists to easily access from the bridge D.C.’s growing network of protected bike lanes outside of 15th Street, including those on Pennsylvania Avenue, L Street NW, and, soon, M Street NW. Extending the 15th Street cycletrack would give cyclists access to downtown bike lanes and multi-use paths on the National Mall. Three easy projects, described below, would help to better connect the 14th Street Bridge to the 15th Street cycletracks. Extend the 15th cycletrack one block south, to Constitution Avenue Currently, the cycletrack on 15th Street NW ends at Pennsylvania Avenue. Bicyclists headed south are dumped onto a wide street with many tour buses and fast-moving traffic. Less experienced riders often choose the sidewalk, which has heavy pedestrian traffic and can be filled with vendors selling T-shirts and hats. DDOT’s original cycletrack plans included an extension one block south, but that was never built. So let’s build it! Sign the route The Mall is filled with multi-use sidewalks to view our national memorials. There is plenty of space on these paths that pedestrians and bicyclists can share. But new riders and tourists do not know the bike routes across the Mall. Wayfinding signs, which can explain the bike route for those traveling between the 15th Street cycletrack to 14th Street Bridge, should be installed. Those signs should also tell pedestrians to be aware of the presence of bicyclists. Bicyclists who feel comfortable using the road can still do so, but signing the route would give an alternative to inexperienced riders. Fix the path to the 14th Street Bridge and multi-use sidewalks around the Tidal Basin The paved path from the Jefferson Memorial to the 14th Street bridge needs serious repair. The 8-foot width is insufficient, and DDOT long ago placed an interstate sign support directly in the path of trail users. The path needs to be widened to at least 12 feet, and the sign needs to be moved. Also, the multi-use sidepaths around the Tidal Basin, between the bridge, need attention. There are pinch points along desired riding routes, especially at intersection of 15th Street SW and Maine Avenue SW. Fixing these small issues would go a long way for improving the riding experience. The 14th Street Bridge is a major river crossing for area bicyclists coming to downtown from Virginia. Now is time to finish the connection with a few immediate fixes. View Connect Virginia Cyclists to DC in a larger map