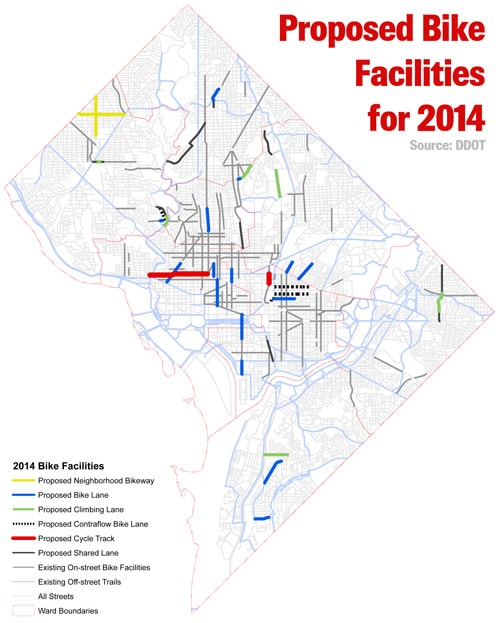 The District Department of Transportation has released its proposal of bike lanes to install in 2014. You can view the proposed facilities on a full map of the city or on a one-page spreadsheet, both on DDOT’s website. At the top of the list are several 2013 projects, such as the M Street cycletrack and contraflow bike lanes on G and I streets NE. The 1st Street cycletrack between M and K Street will ostensibly be finished this spring; this will be a critical on-street connection between the Met Branch Trail and Union Station. Other facilities to get excited about include bike lanes on 14th Street NW from Florida Avenue to Columbia Road, a connection of the 4th Street SW bike lanes across the National Mall to Pennsylvania Avenue, and climbing lanes on Malcolm X Avenue SE and Rock Creek Church Road NW.

If you don’t see a project you desire on the 2014 list, check out the proposed Move DC bike facilities plan. Move DC is DDOT’s 20-year multi-modal plan for all the District’s transportation modes. A draft plan for public review and comment is expected this spring, with a final version to be released over the summer. Once the Move DC plan is adopted, DDOT will begin planning and implementing projects from it. D.C.’s bike network is planned to grow to over 74 miles of cycletracks, 122 miles of bike lanes, and 133 miles of multi-use plans.

While what DDOT has released is merely a list of proposed bike lanes for 2014, we hope that the agency will meet its required goal of installing 10 miles of lanes per year. Go get ’em, DDOT!