Next Saturday, September 20th, come take a walk with WABA’s trail advocates on the planned but unbuilt route of the Metropolitan Branch Trail in NE DC.  The existing and interim 8.5 mile trail from Union Station to Silver Spring Is already a hub for neighborhood recreation and a major commuter route, drawing bicyclists from Silver Spring and beyond.  But the unbuilt second phase, between Fort Totten and Takoma, remains a significant gap in the trail network.  Join us Saturday at 1 pm to see where the trail will go, what it will look like, and what stands between the interim route we have today and the seamless trail of tomorrow.

One of the most common questions we get these days is “When will the Met Branch Trail be finished?”  The simplest answer is that while projects of this magnitude take time, progress is being made. The Met Branch Trail that we have today is the result of over twenty five years of steadfast effort from committed residents, advocates, and planners through a lengthy public process.  Construction, too, spread for over a decade with early segments opening as early as 2004 (Michigan Ave to Ft. Totten Drive) and as recently as August of 2013 (Monroe St. to the Brookland Metro). Today the trail boasts 4.2 off-street miles stretching from Union Station to Fort Totten Park and a short span in Montgomery County.  This spring, the District added a half a mile protected bike lane through NoMa as an additional southern option, and in the coming fall and winter, a connection to Florida Ave NE and a bridge to the the Rhode Island Metro are expected to open. 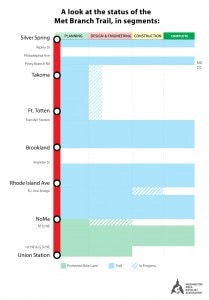 Breakdown of what is built, under construction, in design, and yet to come

While there is plenty of progress to celebrate and enjoy (thousands of MBT users do each month), there remains a substantial gap in the trail between Fort Totten and the District line.  And though the interim on street route offers mostly quiet streets, it is no substitute for a fully separated trail.  In July, we received the exciting news of small steps toward design of this large missing link.  This Saturday, we invite you to join us for a block by block tour of the trail’s proposed route, design challenges, and next steps.

This tour is the first of three trail tours this fall.  Join us in October for a look at two other crucial trail priorities and a glimpse of what the region’s trail network could become.  This tour series is made possible thanks to REI. September 20 – Unbuilt Met Branch Trail Walking Tour October 4 – Southeast DC’s Unbuilt Trails Bike Tour October 11 – Washington Annapolis & Baltimore Trail Bike Tour