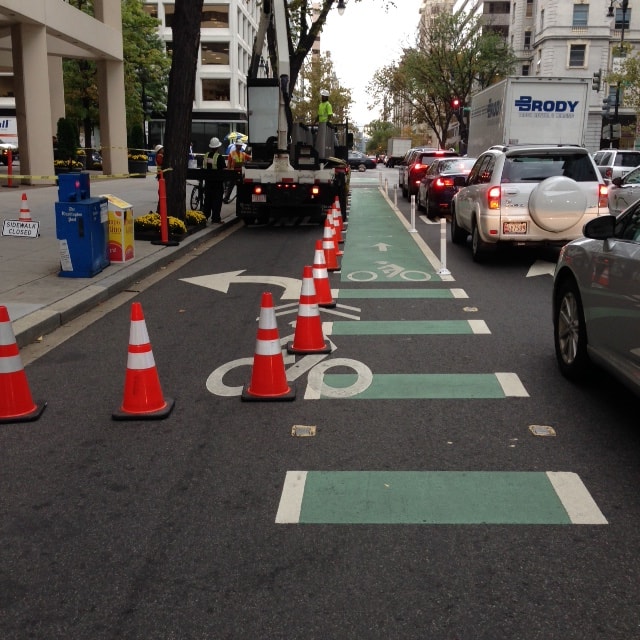 Capital Bikeshare shows how to maintain safe accommodations for bicyclists while they install a new station at 15th & L Streets NW.

DDOT released final regulations for safe accommodations of bicyclists and pedestrians during construction. Future public space permits issued by the city must maintain access for people traveling by foot or bike. A growing number of District residents and visitor rely on walking and biking everyday. Bike lane and sidewalk closures create hazardous situations and have a discouraging effect. With proper enforcement, the final rules should go a long way to maintaining safe access for people walking and biking. Overall, the regulations are pretty good. Draft regulations were released in August and there have not been any substantive changes between draft and final. The regulations give an explicit order of priority for providing safe accommodations: The Bicycle Safety Amendment Act of 2013 became law in the beginning of 2014. WABA worked hard with DC Council on this law. After its passage, this legislation triggered the rulemaking process. The law compels city agencies changes regulations for new permits that effect sidewalks, bike lanes and paths. Future permits must provide “safe accommodation for pedestrians and bicyclists” during construction. DDOT completed the task in less than a year. Thank you DDOT!  We look forward to working together on enforcement of these new regulations. Safe passage during construction makes walking and biking a more reliable mode of transportation.