Tour de Fat is 3 weeks away!

The coolest bicycle festival you will ever go to is just three weeks away. The Tour de Fat will be held on Saturday, May 30th at Yards Park in DC. What’s even cooler? The free festival, sponsored by New Belgium Brewing, raises a ton of support for WABA and other local bicycle non-profits! So come out and celebrate with us.

If you can’t wait for the big day, the good folks at New Belgium have a bunch of chances to celebrate and get in the Tour de Fat spirit between now  and May 30th. (P.S. We saved the best for last, so make sure to check out the whole list!): 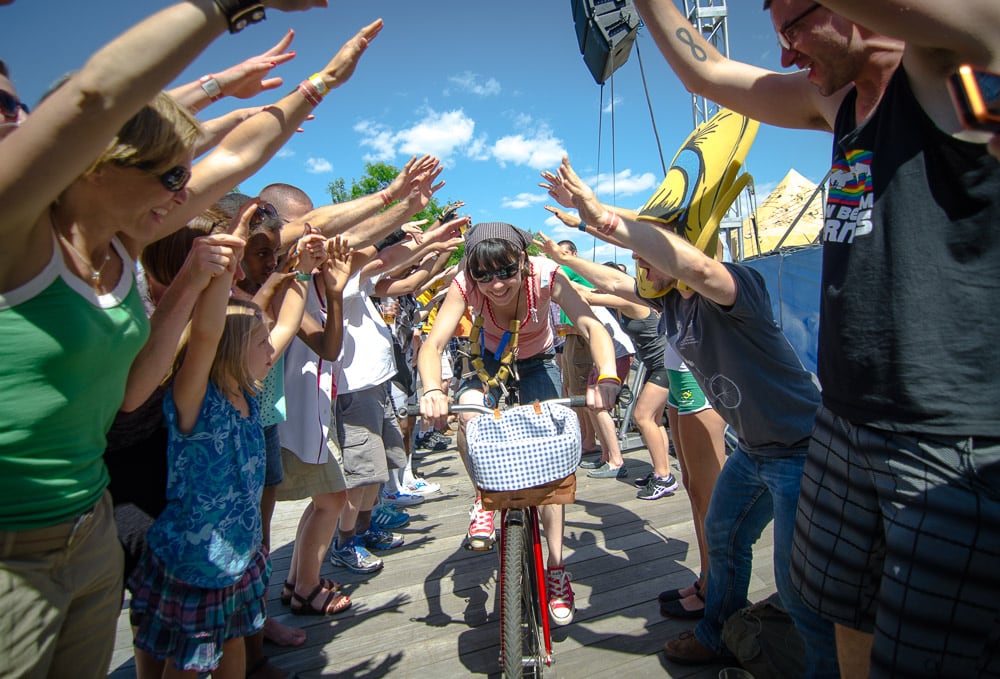 This DC bicyclist traded in her CAR for a BICYCLE at the Tour de Fat last year! (Photo courtesy of New Belgium Brewing.)

Tour de Fat Trivia, Wednesdays at Stoney’s L Street: Swing by after work for Tour de Trivia featuring weekly New Belgium prize packs for the winning team.  New Belgium beers will be featured at $4 pints and $14 pitchers.  Prizes include bicycle 6 pack holders, VIP tickets to Tour de Fat and much more! Rolle Bolle Party, Wednesday, May 13 from 6-8pm at Vendetta Lounge on H Street NE: Come get a taste of our Belgian roots as New Belgium Brewing takes over the bocce courts with the traditional bocce-like game played in Belgium – Rolle Bolle!  They’ll teach you to play and give away NBB shwag and VIP tickets to Tour de Fat! H Street Country Club DC Bike Party after-party, Wednesday, May 13 from 10-11:30pm at H Street County Club: Again New Belgium is partnering with DC Bike Party with beer specials and shwag giveaways.  Join a slew of other bike enthusiasts on the ride departing from Dupont Circle as it takes you through this month’s unique DC route. (WABA will be at the start location of DC Bike Party to tell folks about the Tour de Fat, so give us a high five if you see us there!) WABA and New Belgium’s Tour de Fat Pre-Party & Volunteer Party, Thursday, May 28th from 6-9pm at Churchkey on 14th St NW: WABA and New Belgium are keeping tradition rolling with our annual Volunteer Party/Pre-Party at Churchkey equipped with a raffle for a New Belgium cruiser bike, VIP tickets to Tour de Fat and more. The cruiser bike will be raffled off at 9pm.  All proceeds from raffle sales support WABA!!  For you beer nerds, the beer list will feature 5 unique cask beers, in addition to 15 other New Belgium staples and rarities. All Tour de Fat volunteers (you know who you are – and volunteers are still needed, so sign up here) will get a beer at the party courtesy of New Belgium. Tour de Fat Pre-Show, Friday, May 29th from 5:30-8:30pm at Yards Park, DC: You didn’t know there was a pre-show?! The Tour de Fat Carnies will be showcasing a few of their performances along with the bands performing. Come hang out for the Yards Park Friday night concert series, enjoy a beer (WABA will be there selling brews!) and get a little free, live entertainment before the big day – make sure you come back on Saturday when the party really happens! THE TOUR DE FAT! Saturday, May 30th from 10am to 5:00pm at Yards Park, DC: Here’s the deal – New Belgium is generous enough to put on an amazing show for all of us that’s bike themed and free, plus there’s really good craft beer for sale for just five bucks and all proceeds benefit WABA. There’s interactive games, a bicycle pit, a kids play area, a bike ride, soul music from Charles Bradley, fried chicken and pizza, and unlimited high-fives. You just have to come experience the fun for yourself! We’re also still recruiting volunteers to help us make this amazing bicycle festival happen!

We will see you at the Tour de Fat!!