For every new trail, bike lane, and policy that makes the region a better place to bike, there are committed advocates working in their communities, with government officials, and WABA staff to improve our streets for people who bike. Here is an update from Joe McCann, a DC advocate.

Louisiana Ave. is a hostile place for people on bikes (image from Google Street View)

We are happy to report that broad consensus is emerging for the creation of a protected bicycle lane linking Union Station and the Capitol grounds via Louisiana Avenue.  In recent months, Ward 6 Council Member Charles Allen, Advisory Neighborhood Commission 6C (ANC 6C) and the Congressional Bike Caucus have separately written the Architect of the Capitol and the District Department of Transportation (DDOT) to express strong support for a protected bike lane on Louisiana Avenue as a means to create a safe and efficient bicycle link between two major employment, transit and tourist centers in the heart of the District. Read these letters here: Charles Allen, ANC 6C, and Bike Caucus.

By way of background, the Architect of the Capitol (AOC) is responsible to the United States Congress and the Supreme Court for 17.4 million square feet of buildings and more than 553 acres of land throughout Capitol Hill, including Louisiana Ave and much of the area between Union Station and the Capitol. In a response letter addressed to ANC 6C, the AOC indicated that he is actively evaluating the feasibility of a bicycle facility along Louisiana Ave (read the letter). DDOT, which has primary responsibility for transportation infrastructure in the District, already has identified Louisiana Ave as the desired location for a bicycle link between Union Station and the Capitol in its 2005 Bicycle Master Plan and again more recently in its 2014 MoveDC plan.

The potential implications of a protected bicycle facility on Louisiana Avenue are enormous.

Although less than a half mile apart, Union Station and the Capitol are separated by multi-lane roadways with challenging intersections and fast moving traffic.  Under these conditions, it is exceedingly difficult today for even the most experienced bicyclist to travel the short distance between these two hubs without unacceptably elevated risk. 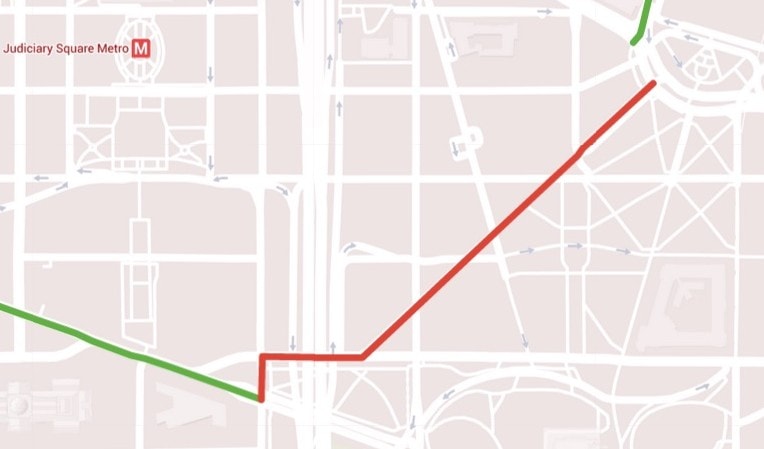 The situation is particularly acute because Union Station annually welcomes hundreds of thousands of visitors, many of whom are destined for the Capitol and the National Mall.  Most of these visitors are unfamiliar with District roadways and therefore require the physical separation and way-finding that only a protected bike lane can afford them during their uniquely special visit to the Capitol.

By filling the gap between Union Station and the Capitol grounds, the Louisiana Ave. lanes also would link together existing protected bike lanes on Pennsylvania Ave NW and First Avenue NE and thereby complete a contiguous network of protected bicycle infrastructure stretching across the L’Enfant City from the Brookland neighborhood in Northeast DC to Georgetown and Columbia Heights in Northwest DC.  This connected network of facilities would mark a major milestone in the District’s efforts to promote bicycling as a safe and viable means of transportation for people of all ages and bicycling abilities. 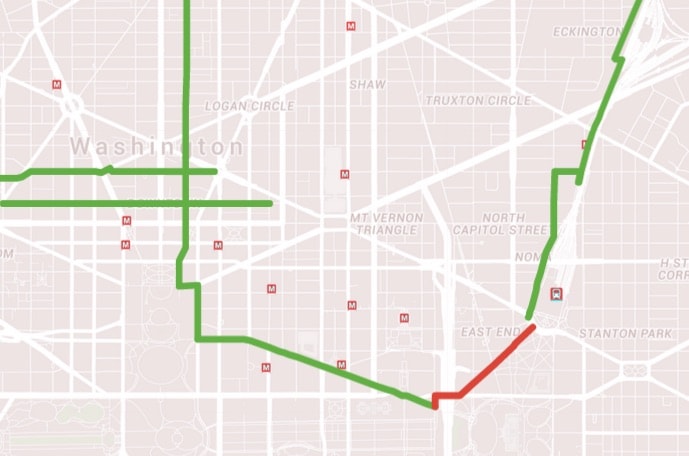 WABA and its members are very encouraged that the AOC, in collaboration with DDOT, is actively evaluating the viability of a protected facility on Louisiana Ave.  The League of  American Bicyclists recently recognized the AOC as a “Bicycle-Friendly Business” at the Bronze Level. We are hopeful that the AOC will build upon this achievement by approving the Louisiana Ave protected bike lane.  In the process, the AOC will transform the Capitol campus into a safer place to visit and a model for the nation in terms of bicycling infrastructure.

Joe McCann is a WABA member who previously served as the chair of ANC 6C’s Transportation and Public Space Committee.  He lives and works near Union Station.