Better bike laws before the DC Council next week 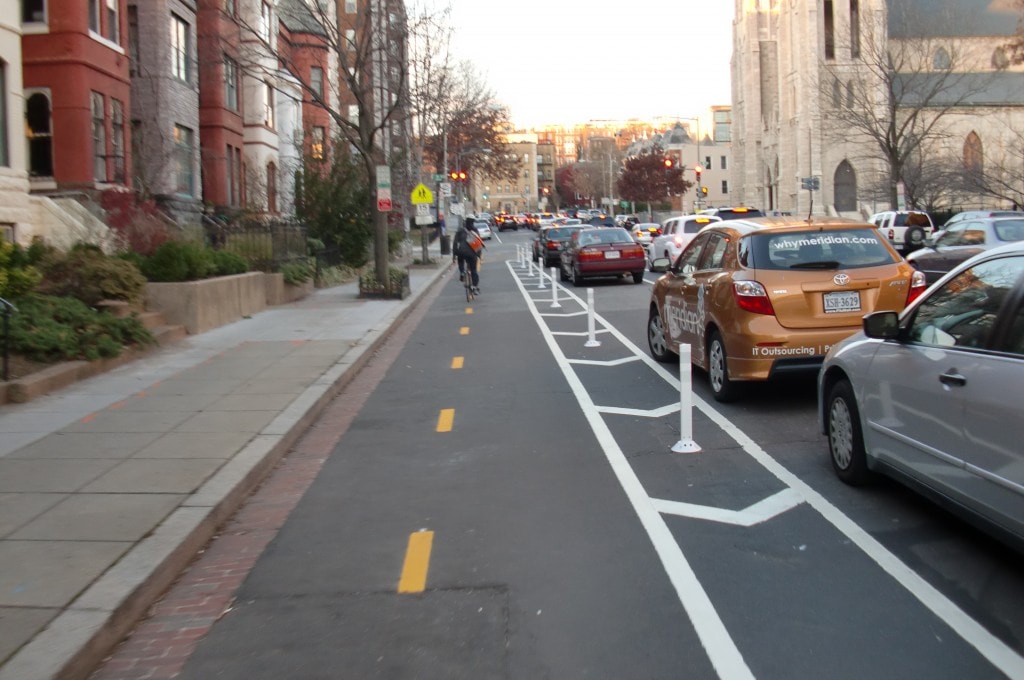 Three important pieces of legislation will be considered by the DC City Council Committee of Transportation and the Environment December 8th. Adoption of these bills would represent a major step forward in the District of Columbia’s stated goal of eliminating traffic fatalities and serious injuries by the year 2024. These bills would make the streets of the District safer and friendlier for pedestrians, bicyclists, and drivers alike, enshrining the important principle that streets are for people. These bills would also enhance the quality of life for residents and visitors and improve the economy and environment of the District of Columbia. Over the past year, we’ve worked hard to bring these bills to the table. Now we need you to show your Councilmembers on the transportation committee that you support these bills and the bold vision they represent.

Here’s a rundown of the key issues addressed by the bills.

(Believe it or not, this is the short version…)

Complete Streets Policy: One of the most important sections of both the Bicycle and Pedestrian Safety Act and the Vision Zero Act relates to complete streets policies. Each bill lists the principles and purposes of the city’s complete streets policy. The Vision Zero Act would “ensure the safety and convenience of all users of the transportation system, including pedestrians, bicyclists, users of mass transit, people with disabilities, the elderly, motorists, freight providers, and emergency responders.” (p. 2, l. 19.) The Bicycle and Pedestrian Safety Act includes similar language. (p. 8, l. 183.) In order to actually change the status quo and create streets for people, the complete streets policy should elevate the safety and convenience of pedestrians, bicyclists, users of mass transit, people with disabilities, and the elderly over the convenience of motorists and freight providers. The Vision Zero Act would specifically require facilities for all users to be included in any construction, reconstruction, retrofit, repaving, and rehabilitation of a street. (p. 3, l. 16.) This means that DDOT would presumptively install bicycle lanes or separated cycle tracks any time it repaved a street that did not previously have such facilities. WABA strongly supports this provision and recommends its inclusion in any transportation safety legislation that is adopted. Bicycle and Pedestrian Priority Areas: The Bicycle and Pedestrian Safety Act would require DDOT to designate priority areas where the area is used heavily by bicyclists and pedestrians and the area has a high number of collisions. DDOT would be required to make improvements to traffic patterns and infrastructure in priority areas to enhance bicyclist and pedestrian safety. WABA strongly supports this program and recommends its inclusion in any transportation safety legislation that is adopted. We would like to see the bill revised to provide that DDOT shall actually implement, and not just recommend, safety changes to the priority areas. Open Access to Data and Information: WABA strongly supports open access to crash and road safety data. Accurate, complete, and accessible data will help the District accomplish many of the goals of its Vision Zero Initiative by: WABA has encouraged the Mayor’s office, DDOT, the Metropolitan Police Department, the Department of Motor Vehicles and the City Council to modernize the District’s crash data collection, integration and disclosure policies in three ways: The Bicycle and Pedestrian Safety Act would take important steps to further these goals by mandating DDOT to publish on its website monthly collision data. One factor required to be disclosed for each crash is the “apparent human factor or factors that contributed to the collision, including intoxication, driver inattention or distraction, speeding, failure to yield, and use of cell phones or other mobile devices.” Unfortunately, it is WABA’s experience that crashes can also be caused by a driver’s intent, recklessness, or aggressive driving. Accordingly, this list should be expanded to include those potential contributing factors. The bill should require MPD to disclose the number and location of tickets issued to motor vehicle drivers for parking, idling, or driving in a bike lane. Like moving violations and unlike most parking violations, parking, idling, or driving in a bike lane creates a safety hazard. Cars and trucks obstructing bike lanes cause bicyclists to merge into car traffic, sometimes abruptly, and sometimes directly into the path of a speeding driver. This is an all-too-common experience for bicyclists in the District, one that discourages inexperienced or apprehensive riders from riding their bikes. A requirement to disclose the number of tickets issued for parking, idling, or driving in bike lanes would send an important message that enforcement is needed in this area, and would allow the City Council and the public to monitor levels of enforcement. Finally, DDOT and MPD crash data has often been released in static reports that do not enable the public to sort the underlying data to produce maps and charts. Therefore, all crash safety data subject to the disclosure provisions of the Bicycle and Pedestrian Safety Act should be disclosed in a format that is easy to read and should be downloadable by the public.

Stop as Yield: The Bicycle and Pedestrian Safety Act would permit a bicyclist approaching a stop sign or steady red light to cautiously make a turn or proceed through the intersection without stopping if there are no vehicles with the right of way in or approaching the intersection.  WABA supports this provision because it would focus scarce traffic enforcement resources on road user behaviors that pose real risks to others – including distracted driving, driving under the influence, speeding, and failing to yield the right of way to pedestrians. Curbing Dangerous Driving: The three bills being considered would improve the safety of our streets by defining new moving violations, strengthening the enforcement of existing violations, and revising education programs.

It is illegal under District law to stop, stand, or park in a bike lane. The penalty is $65 per violation. In 2013, the District issued 4,200 tickets for unlawful parking and standing in bike lanes. The number of vehicles that continue to park in bike lanes demonstrates that this fine is clearly not a sufficient deterrent, especially for commercial delivery drivers.

The district should raise the penalty for illegal parking in bike lanes. Comparable cities have significantly higher fines than the District ($100 in San Francisco and New York; $115 in Chicago).

If you’ve read this entire blog post, you are a bonafide bicycle law superfan, and we’ve got another ask: Sign up to testify at the hearing on Tuesday. Are you in? Email abenjamin@dccouncil.us or call (202) 724-8062 to get a place on the speaker’s list. Then, email advocacy@test.waba.org to let us know you are coming. We’ll have talking points, resources, and staff available to help you write and deliver your testimony. You can also stop by the WABA office on Monday, Dec 7, between 4 pm and 7 pm to discuss in person.