Silver Spring to Get a Protected Bike Lane in 2016

Over the past 20 years, Montgomery County has made big investments and large strides for improving bike access across the county and between its more urban areas. Off-street trails, like the Capital Crescent Trail, Sligo Creek Trail, and Millennium Trail have made long distance trips possible by bike. But, until recently, bike access and street safety have remained a low priority on roads. That is changing, with ambitious plans for low-stress networks throughout the county. In Silver Spring, bike friendly changes are coming quickly. 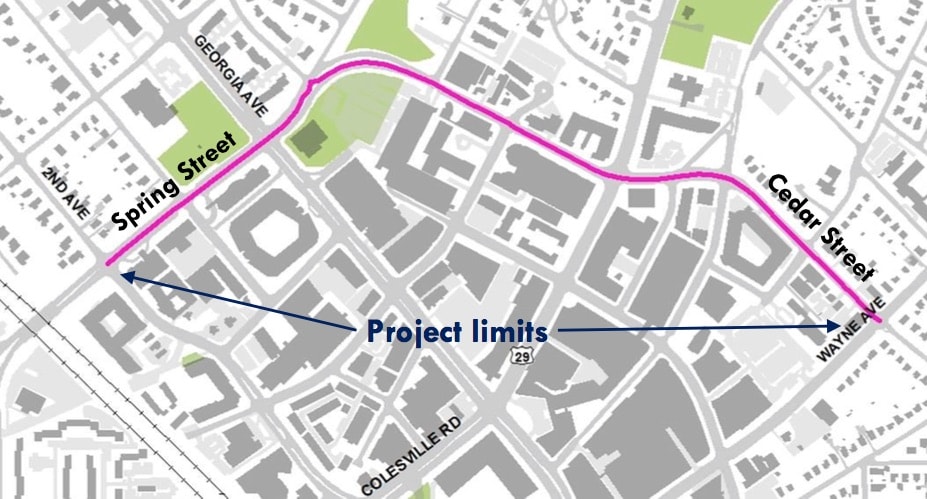 At a community workshop last week attended by over 70 community members, Montgomery County’s Department of Transportation (MCDOT) unveiled plans for protected bike lanes on Spring Street and Cedar Street in downtown Silver Spring. Stretching almost one mile from Second Avenue to Wayne Avenue, the lanes will sit against the curb, separated from car traffic by a painted buffer, vertical posts and parked cars. Following the short Woodglen protected bike lane installed in White Flint in 2014, this project will be the second on street bike facility in the county that puts cyclist safety and comfort first.

To eliminate the precarious situation of sharing lanes between buses and bikes, floating bus stops will give bus riders a safe place to enter and exit the bus without conflicts with bicyclists. Taken together, these designs will make for a low-stress riding environment with few conflicts with motor vehicles or pedestrians.

Even great projects require compromises. While MCDOT has designed a fantastic bike facility, Spring Street intersects state highways at Georgia Avenue and Colesville Road. The State Highway Administration (SHA), which controls these roads and intersections, has different roadway standards, which prohibit many of the bike specific treatments. Colored conflict zones, two stage turn boxes, and bike boxes are unlikely at these intersections. 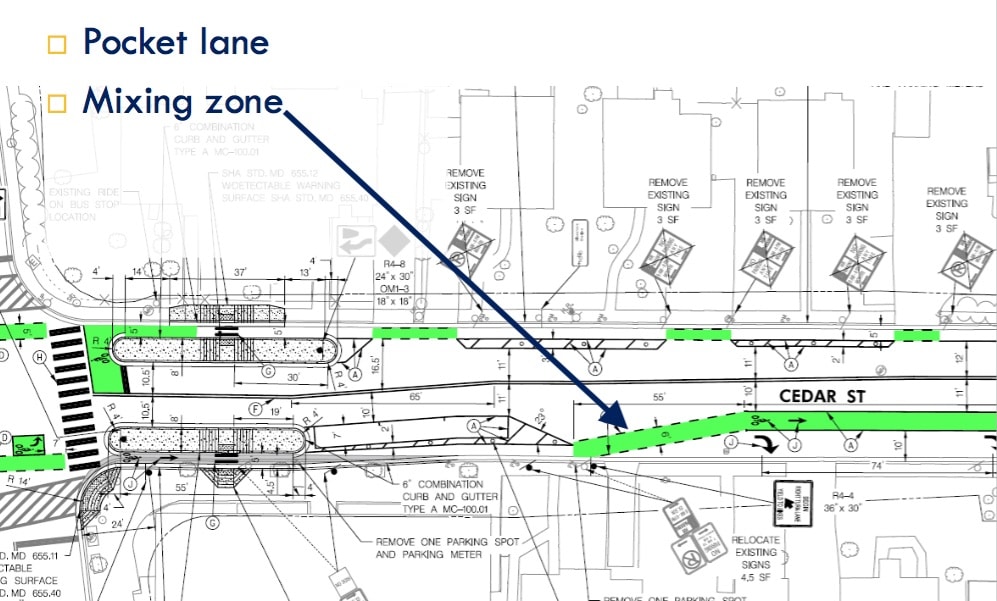 Most concerning, current plans show a transition from a protected lane to an unprotected pocket bike lane at these two intersections. This transition is required due to a high volume of right turning auto traffic. By floating the bike lane to the left of the right turn only lane, the design avoids a serious conflict between right turning drivers and bicyclists continuing straight. The downside is a mixing zone, similar to those found on L Street in downtown DC, which effectively removes separation at  exactly the point where bicyclists are most vulnerable. The preferable solution to this challenge is taking turns. Many cities, including the District, separate high volume turning and through traffic near protected bike lanes with separate traffic signal phases for each. This approach avoids the tricky mixing zone and maintains protection up to the intersection. However, SHA’s guidelines do not allow for this particular solution at this time. Even with these compromises, the project remains a giant leap forward for bike safety and access in Silver Spring. MCDOT staff deserve a great deal of thanks for committing to such a strong plan.

Timeline and Next Steps

This project is moving forward at a fast clip. Comment will be accepted through February 19th and staff hope to move to construction by spring. The facility should open by this summer. This project, and many Silver Spring focused changes to come, is made possible by the Bicycle Pedestrian Priority Area program, a collaborative effort between MCDOT and SHA to improve bike and pedestrian safety and access in priority areas. Silver Spring is one of 17 BPPAs in the county, but is one of the first to see such concentrated improvements. County staff made it clear that this is but one of many bike improvements in the pipeline for Silver Spring. View project documents, including the full presentation here. Submit comments to Matt Johnston (Matt.Johnson@MontgomeryCountyMD.gov) by February 19th. WABA action committee for Montgomery County is working to bring more of these changes to Silver Spring. Click here to learn more about the committee and get involved.