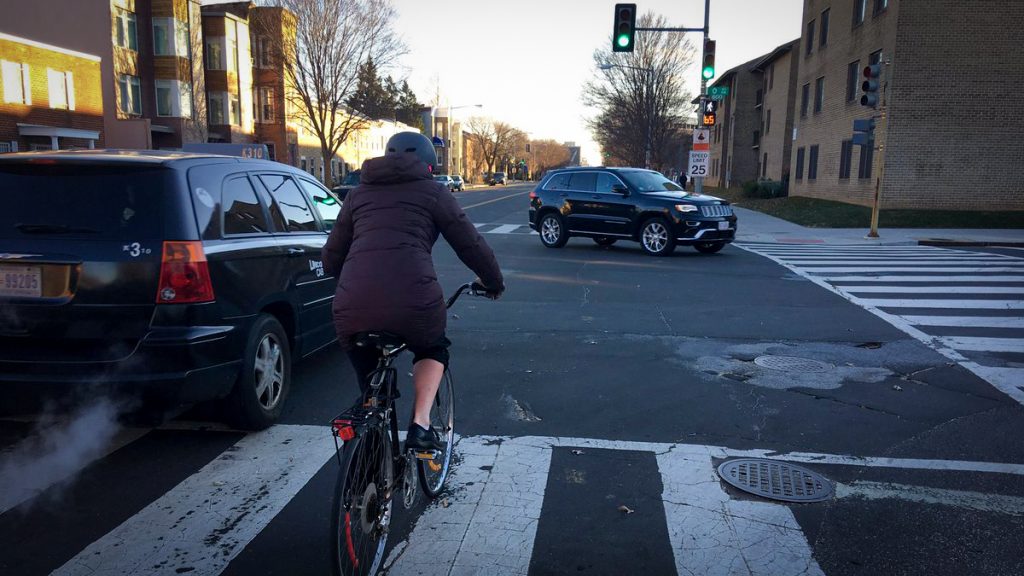 Last fall, WABA members and supporters submitted thousands of comments to Mayor Bowser and the District Department of Transportation  in support of building a protected bike lane through Shaw to downtown. Eleven local businesses in Shaw signed on to a letter of support for the project, and nearly 100 residents took the time on a beautiful Saturday afternoon in February to show up in person to the project’s public meeting to demonstrate support and present testimony on what being able to ride around Shaw on a protected bike lane would mean to them.  Sources tell us that DDOT has recommended one of the four build alternatives and is ready to move forward, but the project has been sitting in the Mayor’s office waiting for a green light.  The original timeline for selecting a preferred alternative for the project was April 2016.   DDOT and the project study team should be commended for the thorough technical analysis and extensive community outreach that went into this project. The four build alternatives that have been presented to the public represent a more than fair compromise by maintaining up to 95% of on-street residential and Sunday church parking spots, minimizing impacts to traffic, and installing critical pedestrian and bicycle safety improvements. DDOT is recommending a win-win-win.   The reality is that travel through the Shaw corridor is not as safe as it could or should be. In 2014 alone, 49 people were struck by vehicles while walking and biking along streets in the bike lane project study area. In 2015, 25 people were struck by vehicles on 6th and 9th St. In the first six months of 2016 (the period for which crash data is available), 19 people were struck by vehicles on those streets. These figures represent only those incidents that were reported to police and caused injury, so presumably the actual crash rate is much higher. Even with the Mayor’s immediate approval of the Eastern Downtown protected bike lane preferred alternative, it would still take up to a year of additional design, engineering, and construction planning before the bike lanes could be built. As the crash statistics above clearly show, people are regularly coming to harm on these streets. This is preventable and we cannot afford further delays.

WABA has sent a formal letter to Mayor Bowser requesting that she allow the Eastern Downtown project to move forward. You can read the letter here. If you would like to add your voice, please contact the Mayor and tell her that we have waited long enough for safe streets in Shaw.