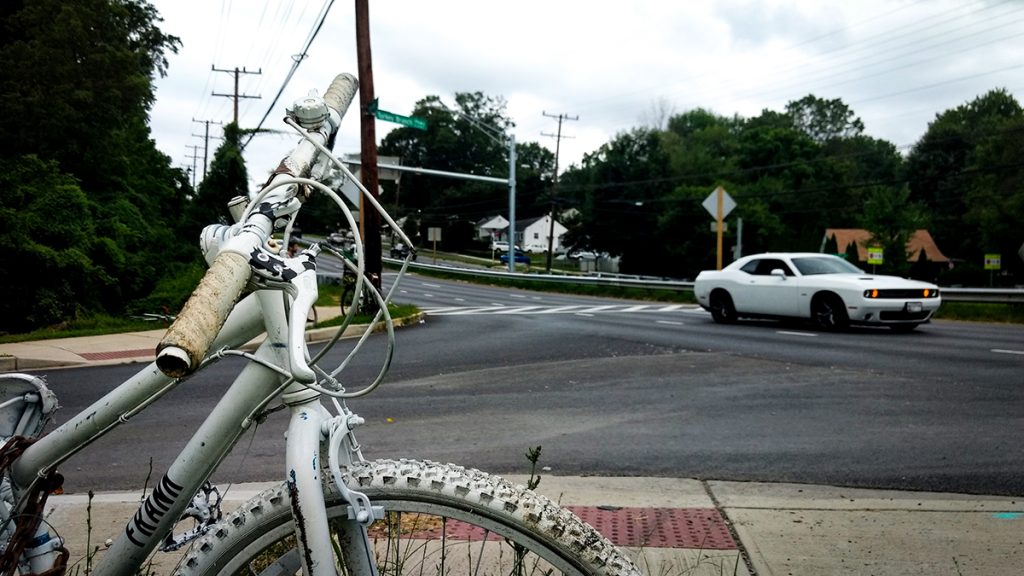 A ghost bike memorializes Frank Towers at the intersection of Veirs Mill Road and the Matthew Henson Trail.

In the span of just six months, two bicyclists were hit and killed attempting to cross five lanes of fast-moving traffic on Veirs Mill Rd at the Matthew Henson Trail in Montgomery County. Following the death of Frank Towers, state highway engineers designed and installed a set of flashing lights to warn drivers to slow down when a bicyclist or pedestrian wanted to cross. But warning lights do not require a driver to stop, so most don’t. The driver who hit and killed Oscar Osario six months later did not stop either. In order to install actual stop lights at intersections like this, we need to make a technical change to Maryland law.

HAWK signals (also called pedestrian hybrid beacons) use a red light to require drivers to stop, and are used in states states all over the country, including Virginia and DC. Studies show that HAWKs reduce pedestrian crashes by 69% and total crashes by 29% compared to unsignalized, painted crosswalks. They make it significantly safer to cross busy streets. HAWK signals save lives, but are not approved for use in Maryland. A bill before the Maryland General Assembly would change that. House Bill 578 would explicitly allow the use of HAWK signals in Maryland. The bill has passed the House of Delegates and will be taken up by the Senate soon. Please ask your Senator to support this much-needed legislation to make biking and walking safer and more appealing in Maryland.

Still not sure what a HAWK signal is? Watch this quick video for a rundown of how they work.