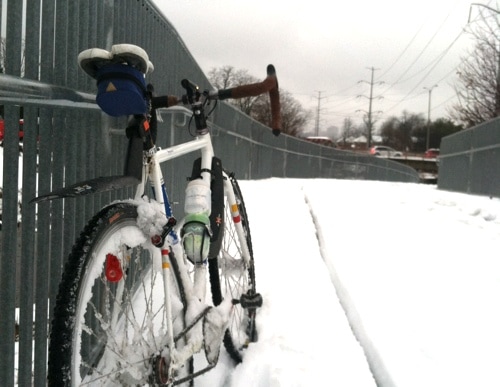 The Arlington County Board is considering budget cuts to eliminate snow plowing of popular trails, resources to improve the county’s streetlight and trail light maintenance, and funding for street repaving.

Since late 2014, Arlington County has prioritized treating and plowing its major multi-use trails after heavy snowfall. Thanks to the advocacy of WABA members and the leadership of the County Board, Arlington treats 10 miles of county trails at the same snow removal priority and response time as primary arterial streets. When road crews head out to plow the major auto thoroughfares, another small crew tackles the bicycle arteries. Even when it snows, Arlingtonians can expect a safe, low-stress bike route. This approach sets a progressive example for the region to follow. Unfortunately, funding for this cherished plowing initiative is under threat. In a deviation from the typical yearly budget process, the County Board is considering $11.1 million in optional budget cuts, including eliminating funding for the staff and equipment for priority trail snow removal. For a yearly savings of just $50,700, (0.003% of the total budget) Arlington would only plow trails after all county parking lots and all DPR assigned street routes are clear. The safety of Arlington’s bike commuters should rate higher than parking lots. The results of these cuts would be dramatic, and disappointingly familiar. When it snows, unplowed trails become impassable for days as snow melts and refreezes, and trail use drops to near zero. Those who regularly use trails to get to work or get around instead pack onto already crowded buses, trains, ride on hazardous roads or drive until conditions improve. Arlington decided in 2014 that there was a better way, and we should not go backwards for such small cost savings.

The Board is also considering cutting planned improvements to the County’s streetlight and trail light maintenance program. The plan would have added staff and resources to improve response times for street and trail light repairs from 30 days to 3 days for routine outages and from 4 months to 1 month for major underground repairs. We all take lights for granted until they stop working. On streets, broken lights limit visibility and make bicyclists and pedestrians more vulnerable. On trails, broken lights in underpasses and tunnels discourage using the trail at night. Funding the planned increase ($830,000) would result in more reliable lighting on streets and trails countywide and create capacity to catch up on a large backlog of major repair needs. Finally, the Board is considering reducing a repaving budget by $325,000. Paving county roads brings large benefits to drivers and bicyclists, especially on quieter neighborhood streets, but it is also responsible for many of the new bike lanes that are striped every year. Compared to long term capital road projects, which involve years of planning and construction, road repaving presents an opportunity to change lane striping to add bike lanes at a fraction of the cost. Reducing this budget will slow the pace of needed repaving. Will you tell the County Board that you want to preserve funding for priority trail plowing, streetlight repair and repaving? Use our action tool to email the board and make your voice heard. Use our sample message or explain why you support priority trail plowing in your own words.

A Measureable Impact on Trail Use

For a snapshot of the impact that quickly plowing trails can have on trail use, we can look to data collected by Arlington’s extensive automated trail counters after snow events. From January 23 – 24, the DC area got 17.8 inches of snow. Comparing the trail counts on snow days from a counter on the Custis Trail in Roslyn (which was plowed) to a counter on the Mount Vernon Trail near the 14th St Bridge (which was not plowed) reveals what you might expect: where trails were plowed, people used them. Where they were not plowed, use was nearly zero. Twitter reports show that the Custis trail was plowed by January 24th.

Looks like the Custis Trail was plowed–yay! & then it snowed some more. @BikeArlington pic.twitter.com/iu89htP9bu 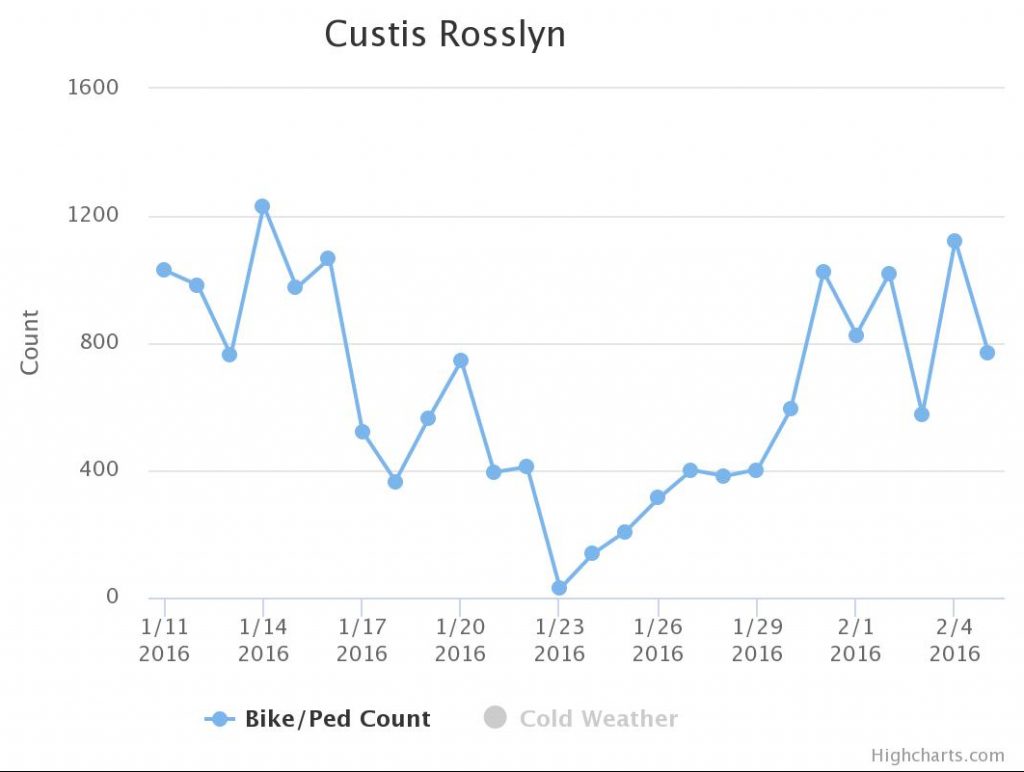 Use of the Custis trail, which was plowed, climbed steadily after the 1/23 snowfall. 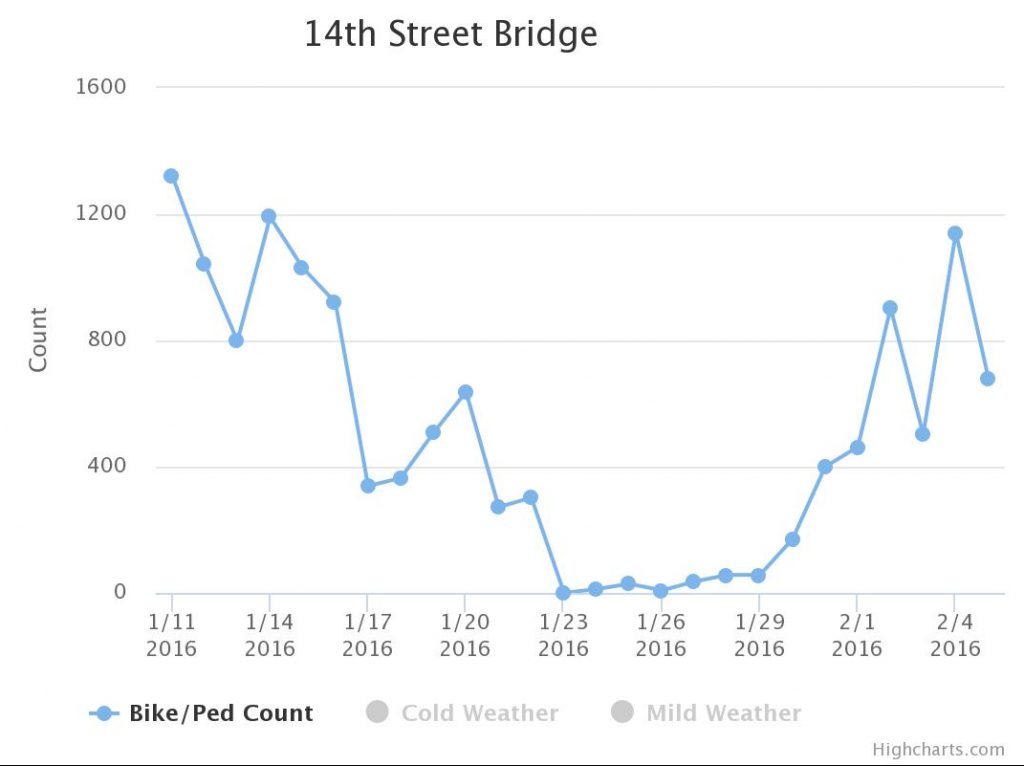 The Mount Vernon Trail, which was not plowed, saw very little use until 1/30 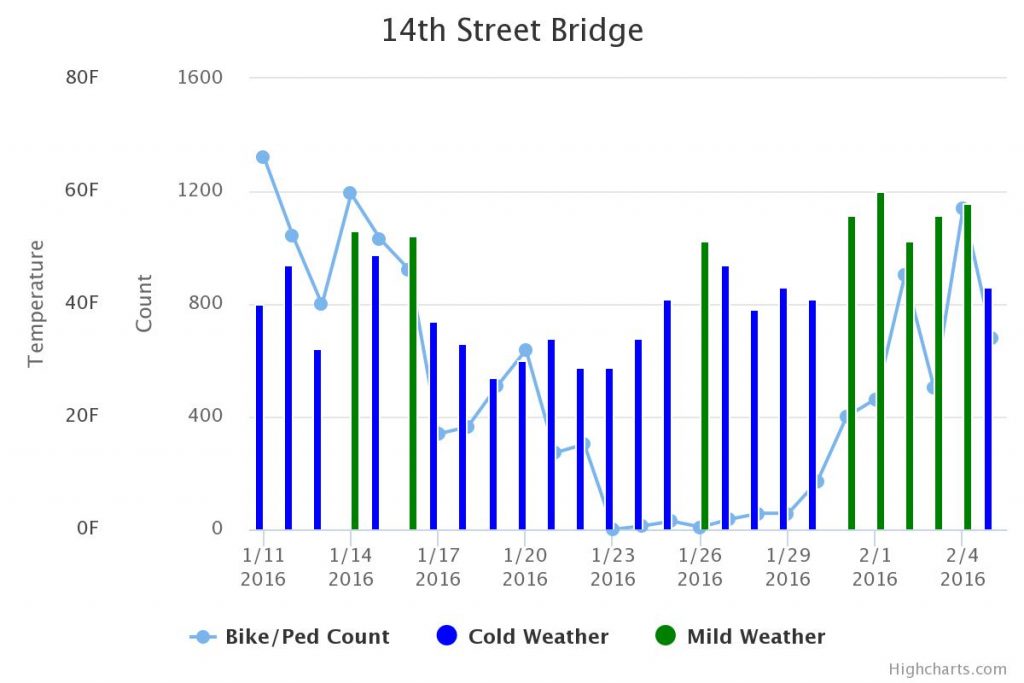 Temperature records show that it was significantly warmer when trail counts began to climb again on the Mount Vernon Trail.

Tell the County Board to reject the proposed cuts to trail snow plowing, streetlight repair, and repaving. Click here to send the board an email. You can also use the County’s online budget feedback form. Next week, we invite you to join our Arlington Action Committee in attending the Tuesday Budget Hearing (details) to show your support for these important County services. To review the whole budget, go to the County’s FY18 budget page. Click here to review the full list of recently proposed cuts.