Your winners of the 2017 Bicyclists’ Choice Awards

We held our third annual Bicyclists’ Choice Awards event on Tuesday, February 28th at the Kaiser Permanente Center for Total Health, and the celebration was a huge success! Our host Tom Sherwood of NBC4 Washington graced the stage with humor and wit, and the awards event brought together close to 150 excited and passionate bicyclists, advocates, WABA supporters, VIPs, and award winners to celebrate the amazing achievements made in 2016 to make bicycling better in our region. We want to thank Tom Sherwood for being a part of our event and making us laugh. Tom is a reporter for News4 specializing in politics and the DC government. He is the resident guest analyst each Friday on WAMU’s Kojo Nnamdi’s Political Hour. You can find Tom on Twitter at www.twitter.com/tomsherwood. Tom, we will snap a photo of you stopping at the stop sign at Hains Point East Potomac Park one of these days,  just you wait. 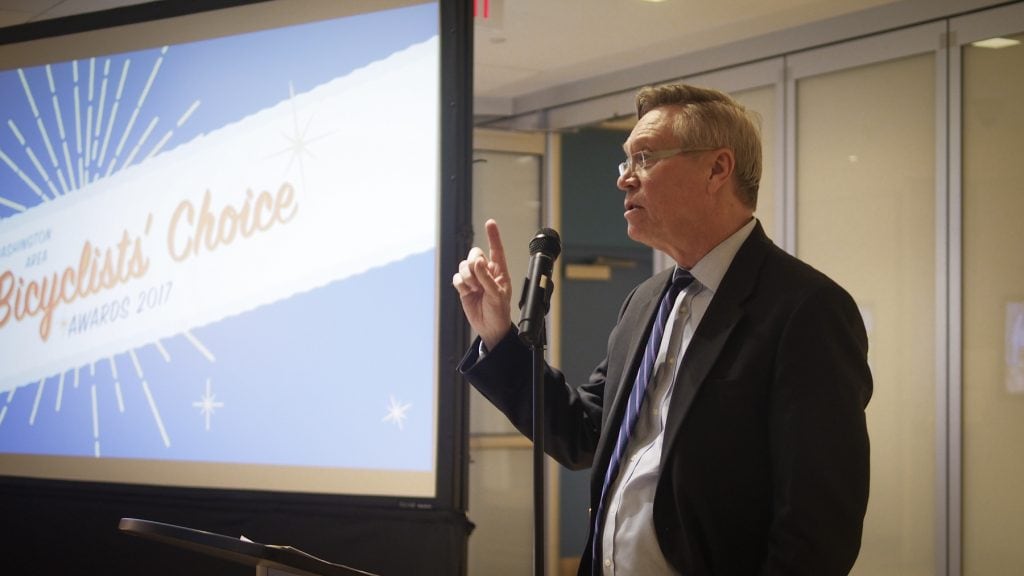 Thank you to everyone who came out to watch and support the awards show: the event could not have happened without you – your nominations, your votes and your interest in attending the event. The Bicyclists’ Choice Awards is an important opportunity for WABA to recognize the people and places in our region that make bicycling great, and we were so happy that many of you were a part of it. Continue reading to find out who won and to see photos from the event.

We are pleased to announce the nominees and winners of the publicly-chosen Bicyclists’ Choice Awards:

Nominees for the Best Improvement for Biking in 2016 in the District of Columbia: 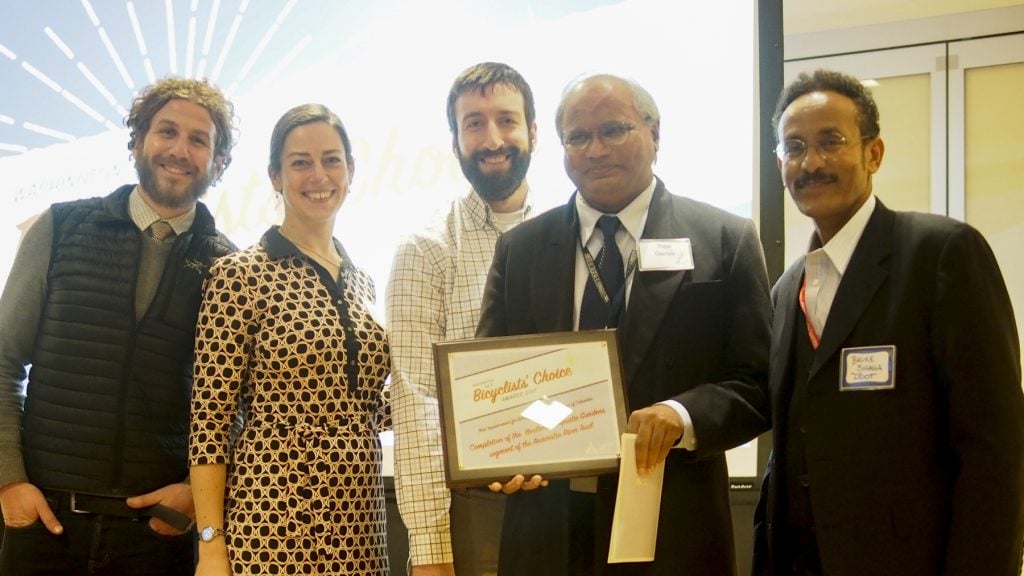 Nominees for the Best Improvement for Biking in 2016 in Maryland: 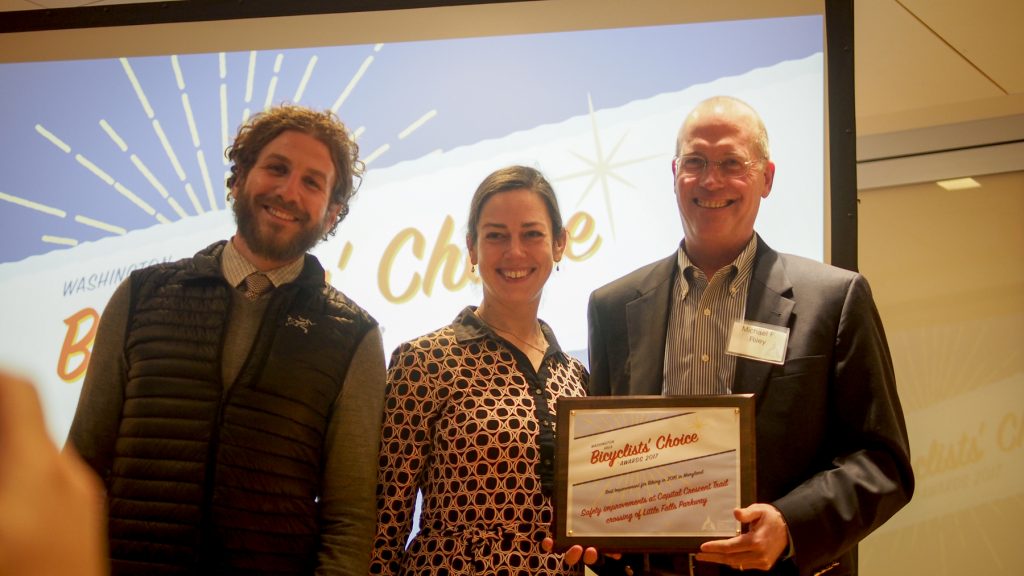 Nominees for the Best Improvement for Biking in 2016 in Virginia: 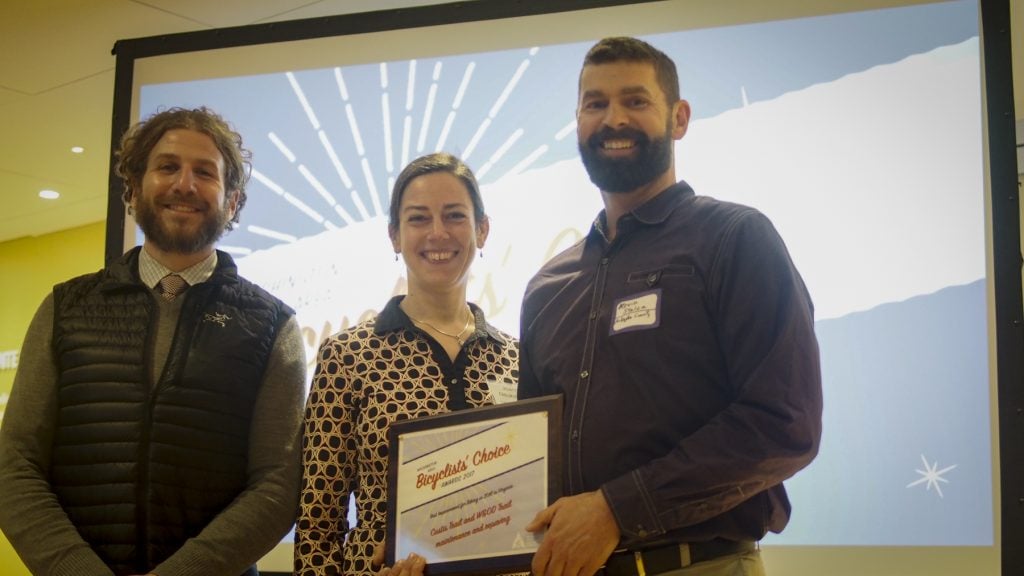 Nominees for the Bike Friendliest Neighborhood or Business Improvement District in 2016: 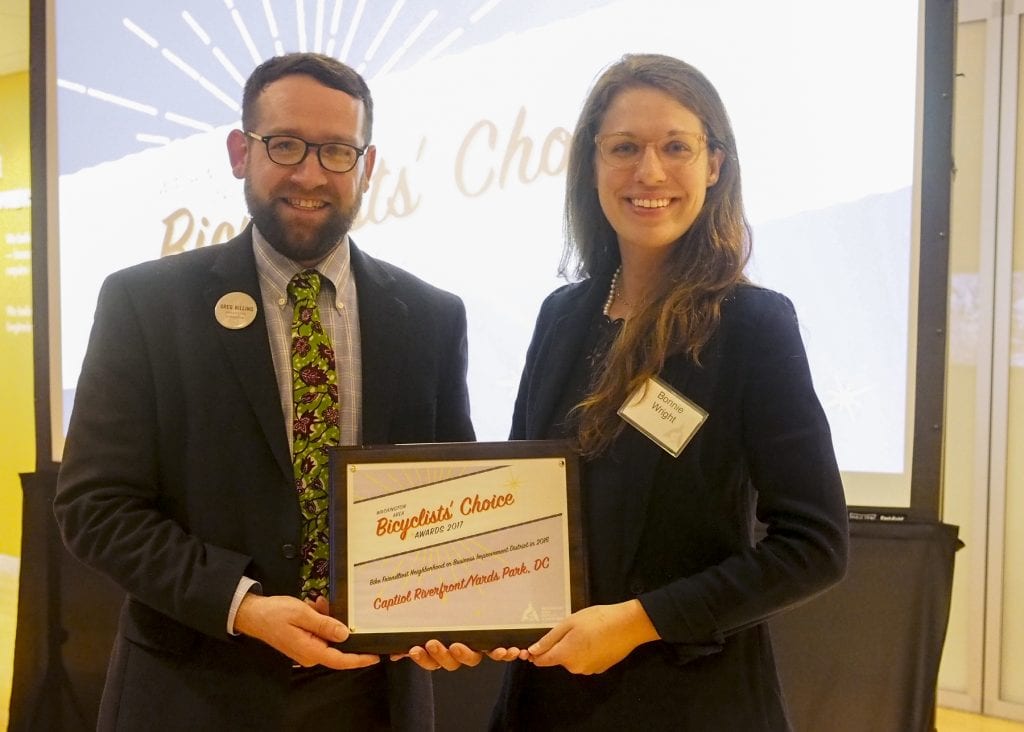 Bonnie Wright, Marketing & Communications Manager for the Capitol Riverfront BID, accepts the award on behalf of the BID.

Nominees for the Best Bike Shop in 2016: 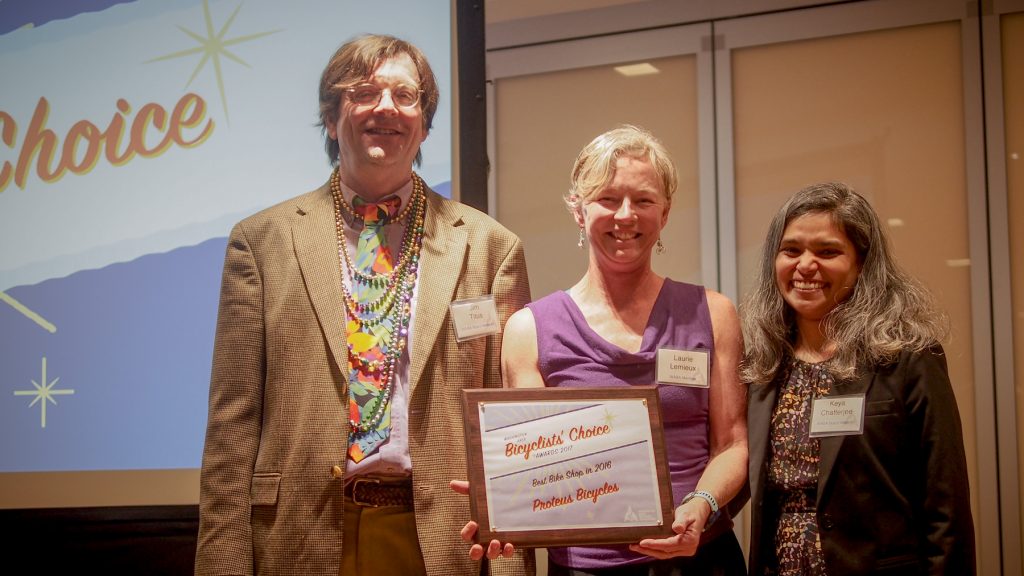 Nominees for the Best Social Ride in 2016: 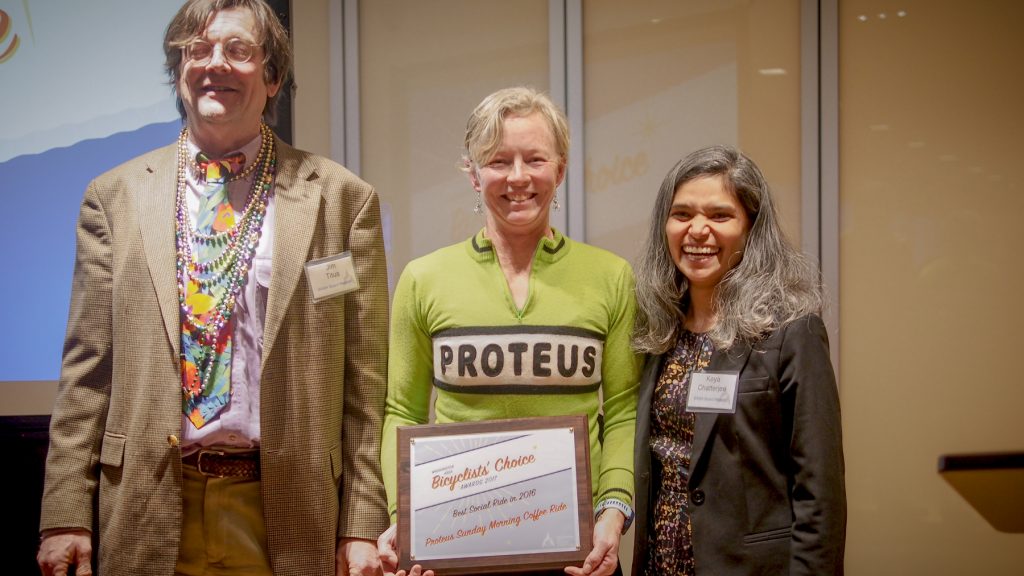 Laurie Lemieux, co-owner of Proteus Bicycles, accepts her second award of the night.

Nominees for the Bike Friendliest Business in 2016:

Nominees for the Biggest Bicycle Advocacy Win of 2016 in the District of Columbia: 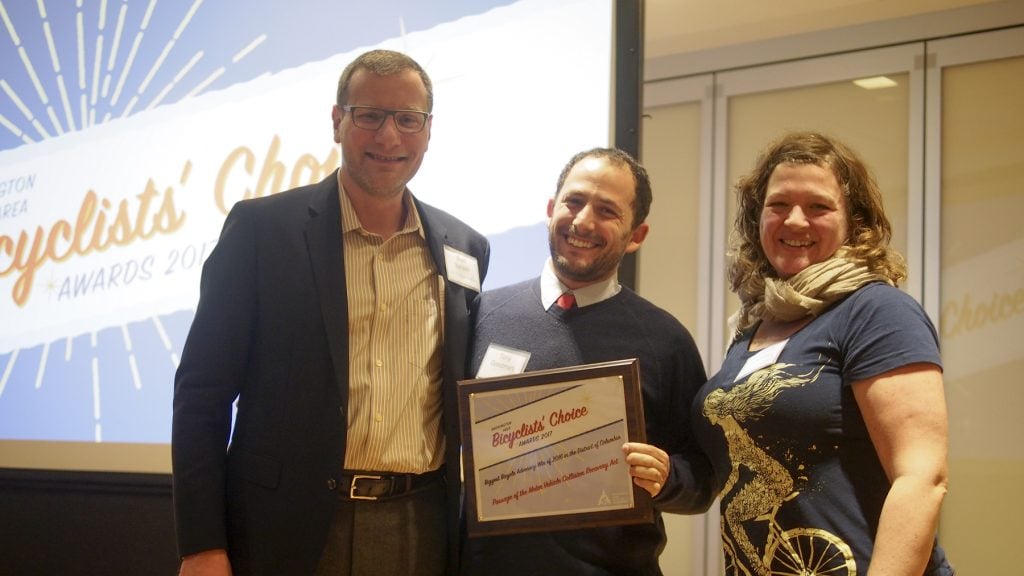 Accepting the award on behalf of the DC Council is Tony Goodman, Councilmember Grosso’s Chief of Staff.

Nominees for the Biggest Bicycle Advocacy Win of 2016 in Maryland: 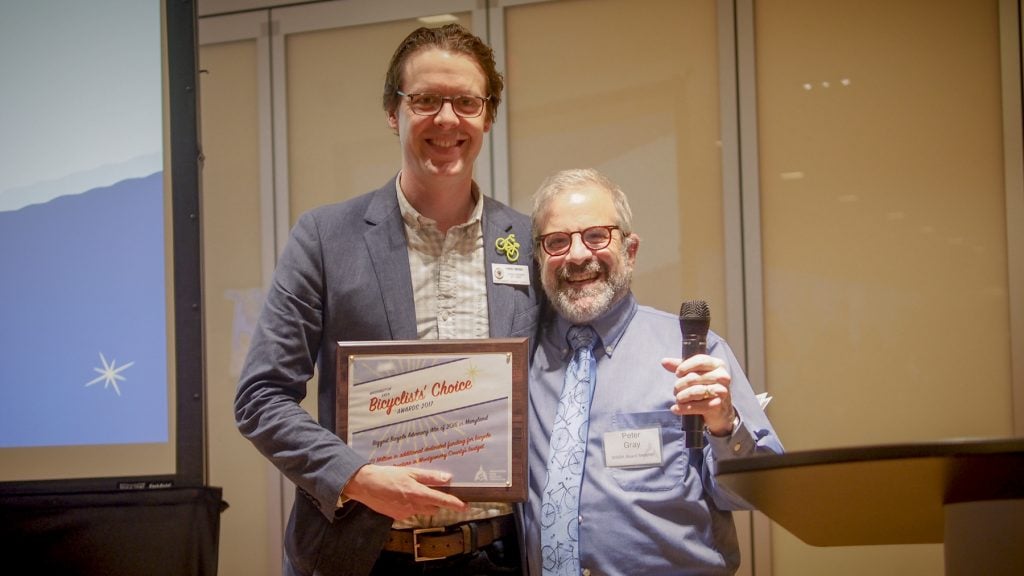 Nominees for the Biggest Bicycle Advocacy Win of 2016 in Virginia:

Winner: Passage of the dooring bill that made dooring illegal in Virginia! Congratulations to all of the nominees and winners of the Bicyclists’ Choice Awards.

We are pleased to announce and honor the winners of the WABA Awards:

Chris Slatt receives the Advocate of the Year Award for his dedication and hard work on the transportation commission and the Bike Friendly Ballston campaign. 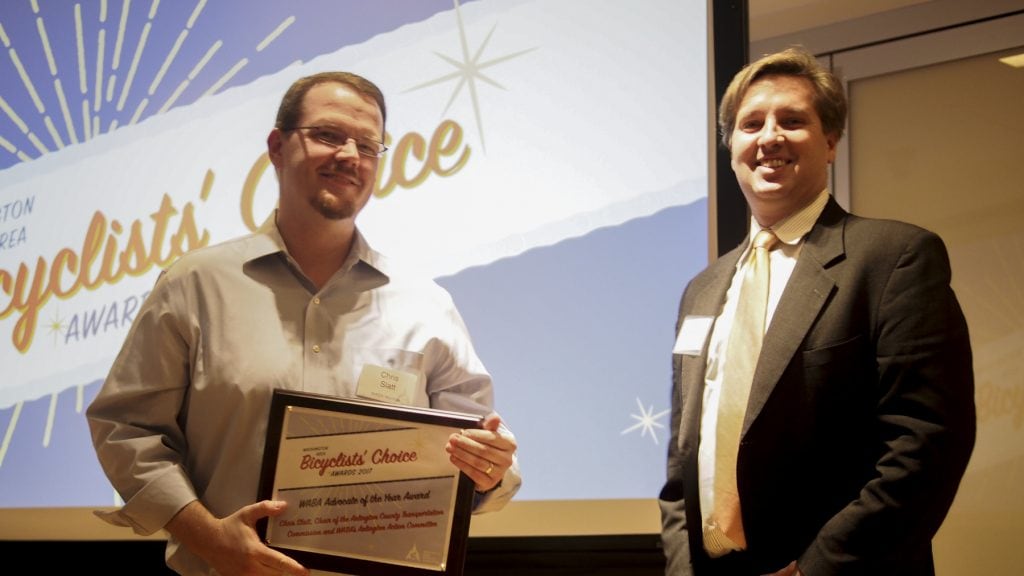 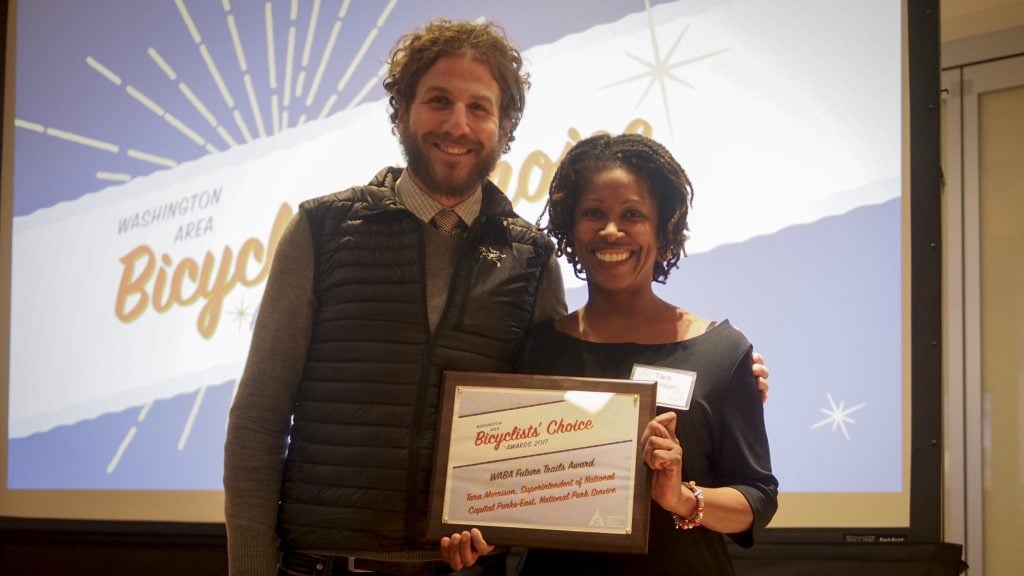 WABA Biking for All Award: Jessie Webb, DC Department of Parks and Recreation

Jessie Webb receives the Biking for All Award because of how much he has gone above and beyond to promote bicycling in his community and for being such a positive internal advocate at DPR. Jessie started a youth bike club at the Benning Park Rec Center, sought out additional training as a bike educator and became a League Cycling Instructor, expanded his bike club program to adults, and trained additional DPR staff. 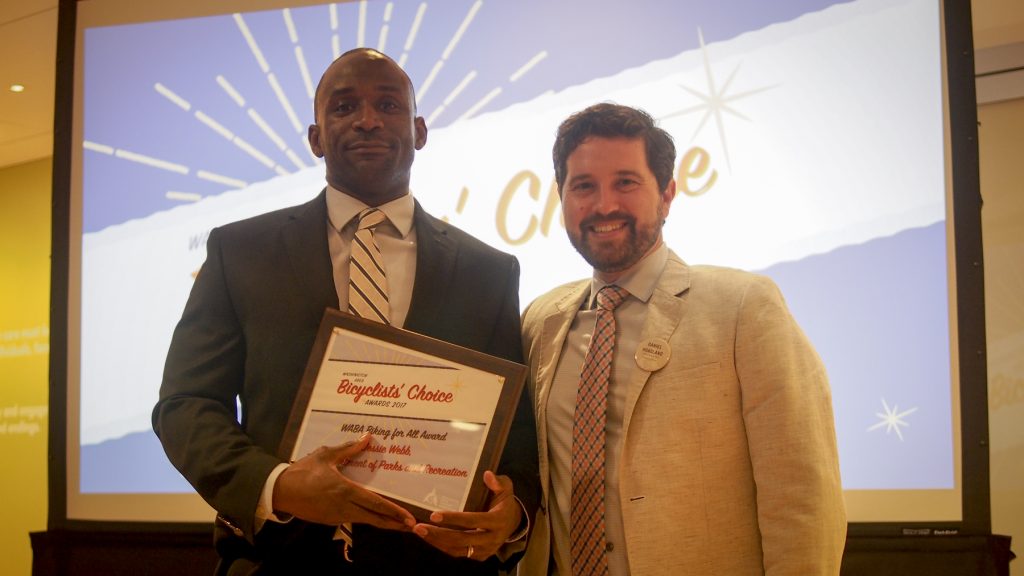 Jessie Webb wins the Biking for All Award. 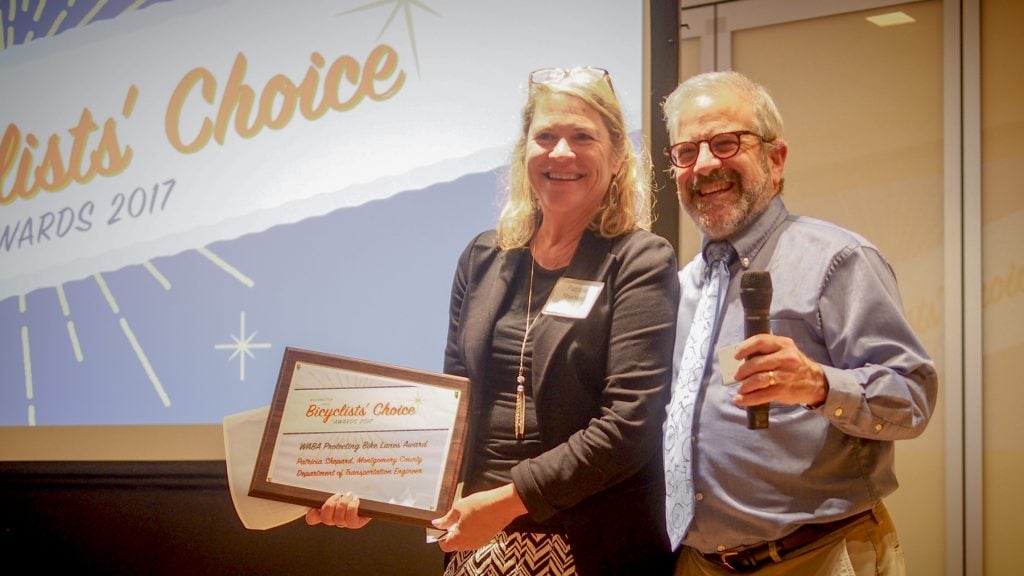 Lesly Jones receives the Volunteer of the Year Award because year after year, she continues to help and support WABA and our mission to make bicycling better. Lesly is committed to positive bicycling and going above and beyond for WABA

Dustin Scott receives the Community Organizer Award for being a shining star within the bike community and organizing the local Color of Cycling rides. This award recognizes your tireless work to bring together people who bike and to build up, strengthen, and grow the DC bike community. 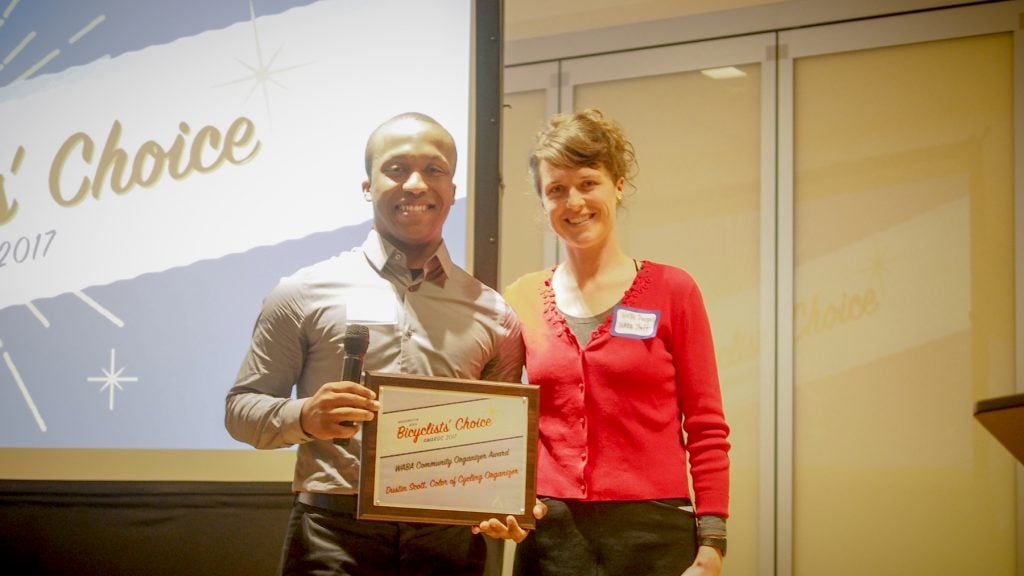 Councilmember Mary Cheh receives the award for Public Leadership for championing contributory negligence and for her dedication and support of making bicycling better and safer in the District. 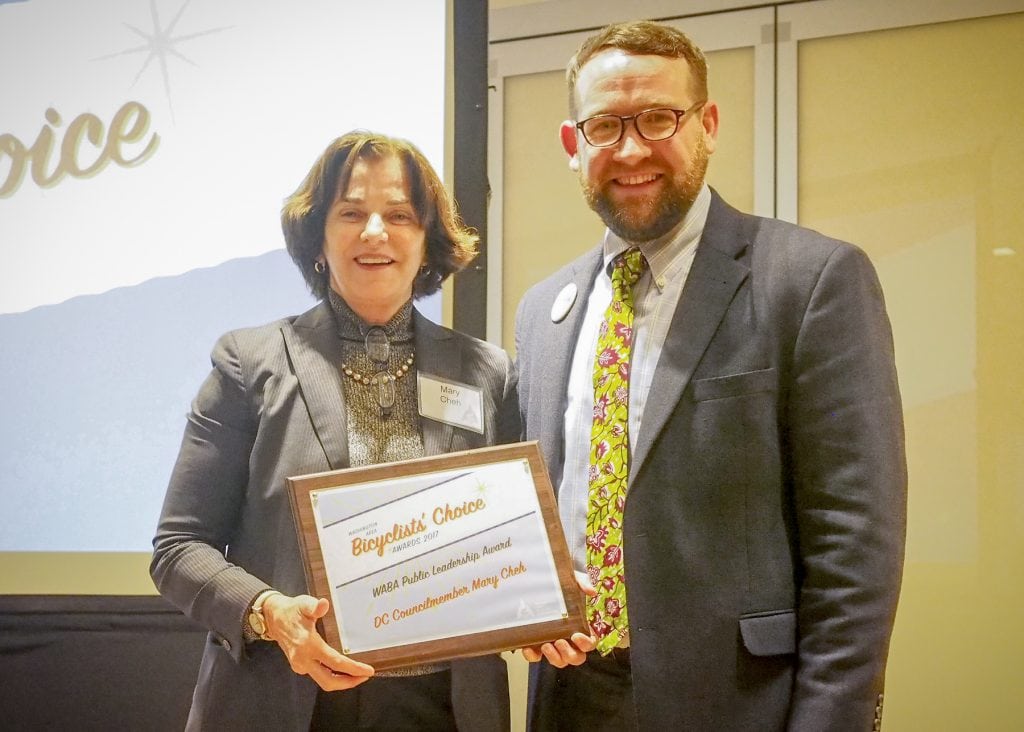