Arlington is scrapping plans for bike lanes on Washington Blvd 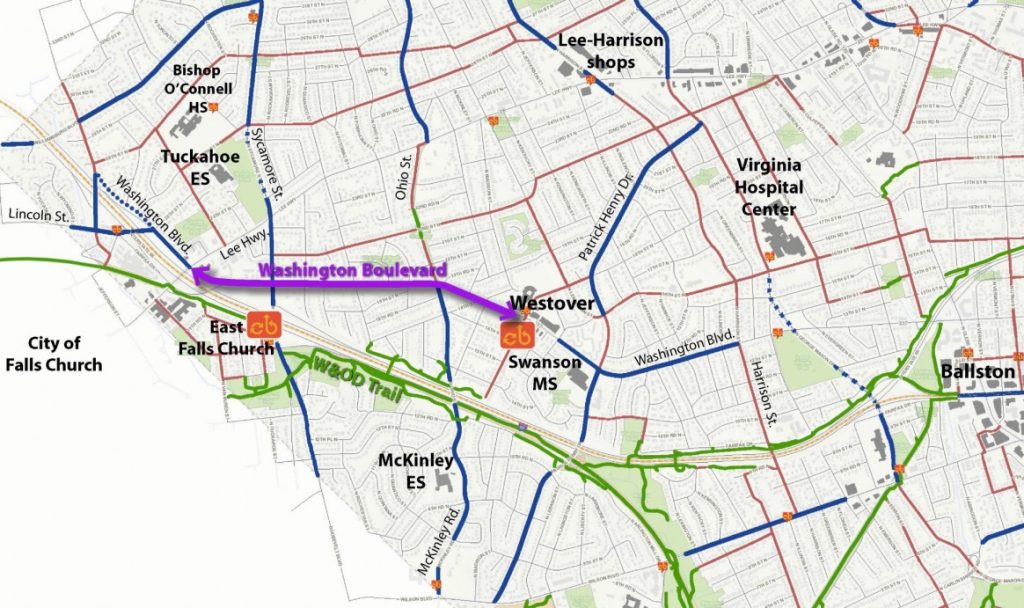 In February, Arlington County announced plans to repave Washington Boulevard and add almost a mile of bike lanes from the East Falls Church Metro to Westover. These lanes would cut chronic speeding, improve pedestrian crossings, and fill a substantial gap in the area’s bicycle network for a safer bicycle connection to the Metro, shops, restaurants, school and library in Westover. Following the first meeting, supportive comments poured in from neighborhood residents. 65% of comments supported the bike lanes as did 55% of comments from neighborhood residents. Now, to save some parking spaces and appease a vocal minority, the County has thrown out the public process, abandoned years of planning, and determined that putting people on bikes at risk is a fair compromise.

The 7 block detour from Washington Blvd. Would you take it?

In the revised plans, five blocks of eastbound bike lane are removed to keep on-street car parking. Where the bike lane ends, a signed route will tell people on bikes to turn off of Washington Blvd onto side streets for a seven block detour. The detour adds new conflict points at seven intersections, an uncontrolled crossing of N Ohio St, and countless driveways. This is unacceptable. We need to send a clear message to Arlington’s leaders that we will not accept a few naysayers hijacking an important street safety project. Washington Boulevard needs continuous bike lanes in both directions.

Push Back at Tomorrow’s Meeting

The final project meeting is tomorrow (Wednesday) and we need your help to push back against these indefensible changes. Join us, speak up and insist on a safe and direct bicycle route in both directions. Wednesday, April 19 | 5:00 pm – 7:30 pm Presentation at 6pm Walter Reed Elementary School 1644 N. McKinley Road (map)