Is the WB&A Trail along MD 704 feasible? Study says YES

A critical gap in the region’s trail network is closer to completion! Prince George’s County took a big step forward on the WB&A (Washington Baltimore & Annapolis) Trail by publishing a feasibility study of a trail extension along Martin Luther King Jr. Highway (also known as MD-704) to connect the existing WB&A Trail to DC. 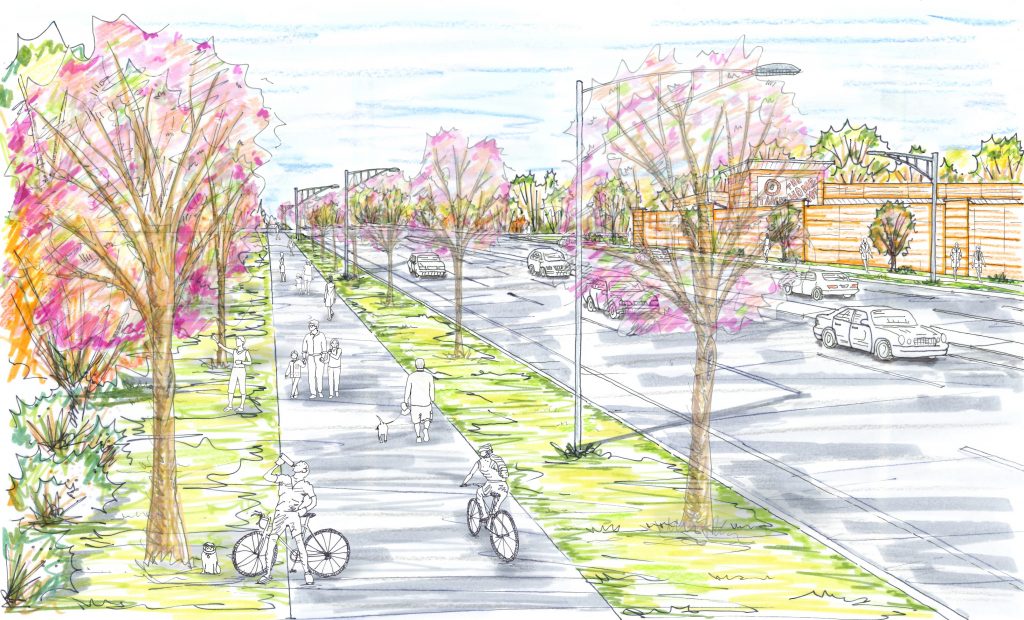 A 12-mile rail-trail in Prince George’s and Anne Arundel Counties, the WB&A Trail is already one of the region’s great recreation and transportation trails. Along the tree-lined route, the trail rises over and tunnels under major highways, connecting neighborhoods, parks, schools and jobs. But the trail is far from complete. The trail ends miles from DC’s northeast border and remains isolated from the rest of the DC trail network. Extending the trail to DC would fill a substantial gap in the regional trail network (in fact, the trail would go all the way across Prince George’s County!), creating safe walking and biking options for the communities along the corridor. That’s one reason why the trail has been at or near the top of the Prince George’s County’s Bicycle and Pedestrian transportation funding priorities since 2011! The WB&A Trail was converted from an old railroad. Unfortunately, planners didn’t make the entire rail corridor into a trail—some was converted into a highway. That highway is Martin Luther King Jr. Highway (MLK Highway), a straight shot from the trail’s southern terminus to the DC line. 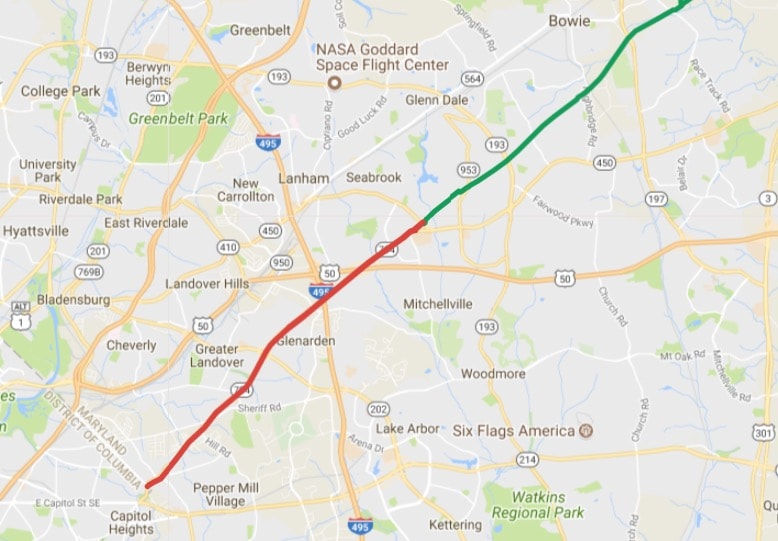 MLK Highway was built to move cars quickly, making the corridor a hostile place for people biking and walking. Despite close proximity to neighborhoods, schools, parks and stores, sidewalks are missing on more than half of the 6.5 mile corridor. Wide intersections make safely crossing the street challenging even where crosswalks and traffic lights are present. It’s a stressful place to bike and walk, so few people do it. 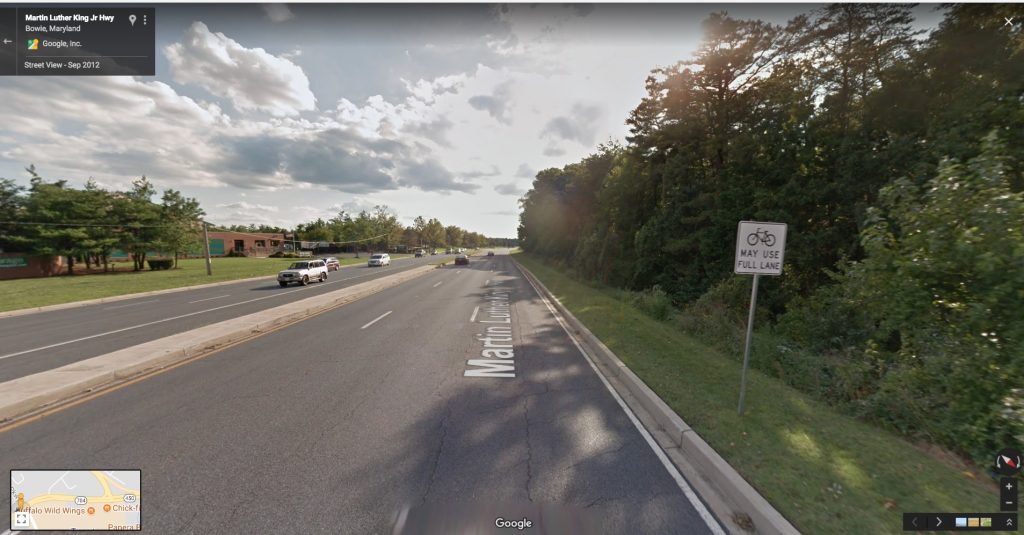 MLK Highway is a 6-8 lane speedway. Building a trail alongside it would make it accessible to people outside of cars.

That’s exactly why WABA, together with Prince George’s County, Oxon Hill Bike and Trail Club, the Capital Trails Coalition and many others are working to change MLK Highway. This major highway is the only connection between dozens of communities, and we strongly believe it should be a safe place to bike and walk. With a new multi-use trail, MLK Highway could transform from a barrier that separates communities into a safe, inviting corridor that unifies them with new options for getting around. And the neighbors would benefit tremendously from a safe place to bike and walk along MLK Highway! The corridor has 16 parks and recreation centers, five schools, two libraries, and over 30 places of worship all within a half mile of MLK Highway. WABA has been with this project from day one. We’ve been leading rides on the trail and on MLK Highway, meeting with elected officials along the corridor, supporting the planning department, researching the economic effects of extending the trail, and organizing trail advocates across the county. 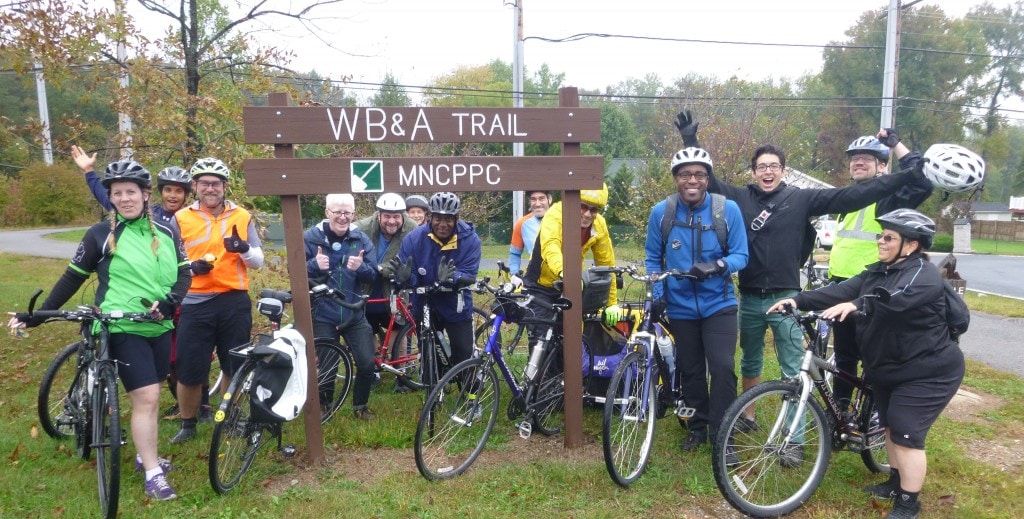 The feasibility study identified places along the corridor that have plenty of room for a multi-use trail, and other areas that are more challenging (based on physical and engineering constraints). The study gives us solid footing, and helps all partners understand what the hurdles will be as the vision for this trail and a path towards completion takes shape. And we’ll continue to be involved, because closing this gap in the trail network is critical to WABA’s mission. A feasibility study is a significant milestone, but we’ve got lots of work to do before we’re safely riding a completed WB&A Trail. Want to get involved in this project? Join neighbors and advocates to build momentum and support for a new 704 trail. Sign up below! I want to support the WB&A!Nevermind