A realistic path to Zero.

Last week, the Mayor released a call to the community: What would you do if you weren’t afraid to fail?

As we think ahead and make plans for the next four years, we want to hear from Washingtonians across #All8Wards.

Be a part of the future of Washington, DC. Share your fresh ideas today using #dc2me.

We have a few thoughts.

Look, it’s no secret: DC’s commitment to Vision Zero has been an open question in 2018. With traffic fatalities up 19% this year over the same time in 2017, advocates across the city have been asking for a reinvigorated commitment from Mayor Bowser and the city government. And the Mayor has heard us—well, kinda. In November, Mayor Bowser unveiled a series of proposals—both procedural and substantive—designed to jumpstart Vision Zero and move towards making that vision a reality. Though we applaud these steps as necessary, we still believe that the city has a long way to go. There are as many questions as there are answers. So, with the Mayor’s call for big proposals ringing in our ears, we’ve been discussing what needs to be done to actually get to zero traffic fatalities in the District. “Big ideas. Not afraid to fail….” So, we’ve taken a hard look at the city’s commitments, what works, what hasn’t…and what do we actually need. Not what is politically feasible, but what do we need? To that end, we’d like to offer a series of policy recommendations to transform DC’s transportation system for the 21st century. 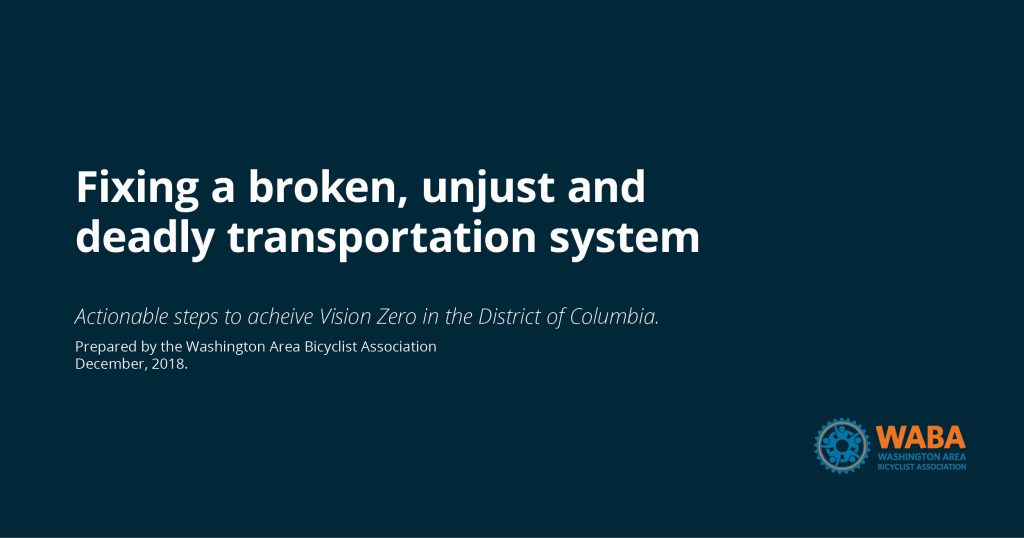 Some recommendations have been taken on board by the city, and some we hope that they will look at in 2019. Transitioning the District of Columbia’s transportation system to be safer, more equitable and sustainable demands overarching and comprehensive strategy—we think we’ve captured the beginnings of exactly what that will take. Since the Mayor asked, we’ve decided to give it a go. We hope you’ll take some time to head to https://www.dc2me.com/ and tell the Mayor all about your own big ideas for transformational change in the region.